Making Me Want to Be Better

Saturday evening, Reverend Marty Younkin, of LoveNotes, and I co-officiated Sofia and James’ wedding ceremony at the Dallas Arboretum (in the ), in . Here are the remarks I shared with them and their guests:

I got reprimanded in Starbucks because of Sofia and James. I am not making this up. Allow me to explain.

I ask each person I marry to write an essay about themselves and send it to me before my second meeting with them. One of things I ask them to address in the essay is why they want to marry their partner. It’s a pretty fundamental question, and if you can’t answer that, well, as Tom Hanks says in Apollo 13, “, we have a problem.”

I ask couples not to read each other’s essays, because it just spices the discussion up. Seriously, though, it’s just cool to see how couples react to what the other has written about them. Take what wrote about James, for instance:

“I fell for him very fast because he was always incredibly sweet, funny, and was very close with his family…. We both just knew we were really good together, and we both saw our relationship going very far. James and I are complete opposites in many ways, but somehow it makes us balance each other out perfectly. He is quiet, so doesn’t care when I can’t stop talking, and I am anxious, so his laid-back personality mellows me out.” 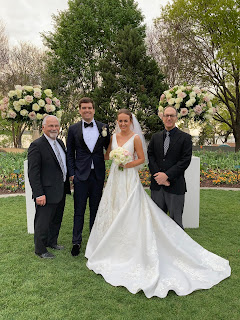 Not only does that just sound cool, but it is also exactly what you want out of your relationship, that the sum total of you together is greater than each of your parts separately.

OK, I still haven’t told you how they got me a Starbucks reprimand. So, here we go. James addresses my question of “why” as follows, in a way that somewhat mirrors ’s answer. I will replace half a word with “expletive deleted” just like they did when they transcribed the Nixon tapes:

“For the past three and a half years she has been my person. (Parenthetically: I thought doctors don’t like Grey’s Anatomy, but apparently, I was wrong…) She is constantly making me want to be better and I love that about her. She does not put up with my bull – expletive deleted – and will call me out whenever I am in the wrong, which is almost always.”

During our FaceTime meeting, when I mentioned that, was thoroughly embarrassed, because apparently, she thinks you’re not supposed to swear when you write an essay for a rabbi. The concept itself is however extremely important, and fundamental to every successful marriage. That’s why I said I agreed with James. With that, the barista, half my age and not an ordained clergyman to the best of my knowledge, walked over to me, and told me in no uncertain terms that they have a “no swearing policy” at Starbucks.