Saturday evening, I got to witness Ariela and Gerardo’s fascinating shamanic wedding ceremony, conducted by Mary Coba. I then officiated their Jewish wedding ceremony. Both ceremonies took place on the of on Isla Mujeres outside . Here are the remarks I shared with them and their guests: 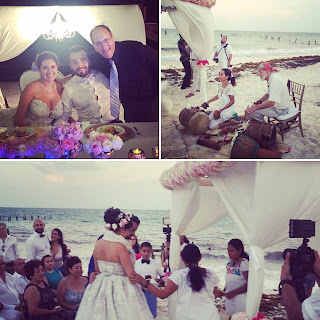 I ask couples to review about a list readings, and see if they want to incorporate any of them into their ceremony. I always recommend that they NOT incorporate a reading, just to have a reading. Rather, I encourage them to see if they connect with any reading, if they feel like it describes their love story. In Ariela and Gerardo’s case, not only did they find such a reading; they so “hit the nail on its head”, in describing their love, that I felt like I had to incorporate it into my remarks, something I rarely do.

First, though, what is Ariela and Gerardo’s love story all about?

Listen to Ariela describe it, “It’s all about seeing things in a mindful way, understanding others and having compassion. It’s about unconditional love for yourself and others.”

So, now, listen to this reading from The Alchemist. Not to belabor the pun, this is pure gold:

“When he looked into her eyes, he learned the most important part of the language that all the world spoke — the language that everyone on earth was capable of understanding in their heart. It was love. Something older than humanity, more ancient than the desert. What the boy felt at that moment was that he was in the presence of the only woman in his life, and that, with no need for words, she recognized the same thing. Because when you know the language, it’s easy to understand that someone in the world awaits you, whether it’s in the middle of the desert or in some great city. And when two such people encounter each other, the past and the future become unimportant. There is only that moment, and the incredible certainty that everything under the sun has been written by one hand only. It is the hand that evokes love, and creates a twin soul for every person in the world. Without such love, one’s dreams would have no meaning.”

Wow. Is that powerful or what?

OK, so you may again be wondering: Wait a minute, sure the reading starts with a universality of love, but doesn’t it then veer towards a uniqueness of the love between two lovers? Well, yes it does, and once again, THAT is the point.

The ideal love is one that bears within it that contradiction. It comes from, “an unconditional love for yourself and others,” as Ariela described it, in a language that everyone can understand, as the Alchemist author puts it. Yet, at the same time, such love causes one to feel like one is in the presence of the only other person in the world. Everything and everyone else melt away.

Finally, this is the same message expressed through the Seven Marriage Blessings, which come a little later in this ceremony. The first five don’t even talk about marriage! They talk about love for the world, humanity, and redemption. The final two talk about marriage, and invoke the Adam and Eve story, the only love story where two lovers really are the only persons in the entire world.
Posted by Rabbi David Gruber at 2:22 PM No comments:

I Am So Lucky That This Person Has Chosen Me

Sunday evening, I officiated Megan and Rozen’s wedding ceremony, at the Cotton Mill, in . Here are the remarks I shared with them and their guests: 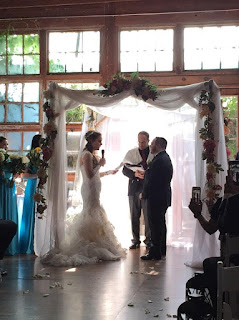 When I sat down to write these remarks I thought of this verse: “A woman of valor who can find, her worth is greater than pearls.” I thought of this not only because Friday night it is customary for Jewish husbands to sing this verse to their wives, but also because of something that Megan taught me about two months ago. She shared with me that her Hebrew name was Pnina. I asked why. She told me that Megan means pearl, which is Pnina in Hebrew. Simple, beautiful, and simply beautiful.

Now, this idea of worth or something being “above worth of” is actually a theme in Megan and Rozen’s relationship. Rozen’s first reaction to seeing Megan was, “Wow that girl is way out of my league.” Megan’s description of her smitten first interaction with Rozen is similar to his first impression of her, “He was this confident, handsome, intelligent boy with the most beautiful green eyes I had ever seen.”

Now, the word translated as “worth” could be translated as “price”. I find that interesting in light of the backstory of Megan and Rozen’s first seemingly random interaction in Sociology class. Rozen says, “At the beginning of the semester, our teacher placed everyone into groups. His method of deciding the groups was by handing out little toy frogs of different color. She was given a purple frog, and I had been given a green frog. I was not okay with that, so I took out all the money I had in my wallet at the time (it was like 20 bucks) and asked the guy sitting next to me (who had gotten a purple frog as well) to trade me frogs for 20 dollars, no questions asked. We were now placed in the same group; my plan had worked!” We agree, Rozen, it definitely did!

And, Megan thinks that investment paid off for her too. She says, “Rozen has always pushed me to pursue my dreams no matter what they may be. He has been a constant support through all of the ups and downs that life has brought, and I am truly grateful for someone as understanding, patient, and loyal as him.” That is why she says, “I knew many years ago that Rozen would be the man that I was going to marry.”

Rozen knew too. He says, and gentlemen, be forewarned, you are about to wince when you hear what he did, “I knew that I wanted to marry Megan about 2 years into our relationship. But I was broke and didn’t think it was the right time to propose. Fast forward to November 2014, I felt like the timing was right, so I sold my motorcycle and used that money to purchase an engagement ring.” Wow. The man sold his motorcycle. Now, THAT’S true love.

Humor aside, the formula that Megan and Rozen have adopted is the formula for a lasting marriage. When two people wake up every morning, and say, “Wow, I can’t believe this; I am so lucky that this person has chosen me,” that relationship’s worth, truly cannot be measured. We should all be so lucky.

Posted by Rabbi David Gruber at 5:44 PM No comments:

Scream from the Rooftops

Saturday evening, I officiated Allison and Adam’s wedding ceremony, at the Omni Hotel, in . Here are the remarks I shared with them and their guests:

One of the great things about being a rabbi is that I can ask questions that coming from other people might sound like an inappropriate question, and people will just chalk it up to my being a rabbi. And, I’m staying for the reception, so watch out... Seriously, though, I always ask every person I marry to write an autobiographical essay, and I always ask that they articulate why they want to get married and why now? 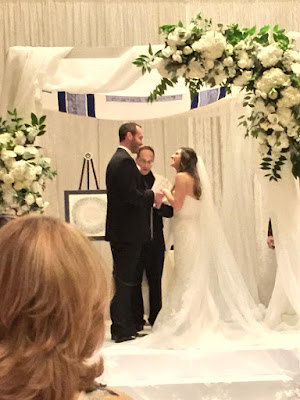 Allison says she wants to marry Adam because, “He is the other half of my soul. When I am with him I am my best self. He challenges me daily to be better mentally and emotionally. He is my best friend and I can’t imagine my life without him.” And why now? “Because the term boyfriend or fiance are not enough to truly describe what Adam is to me. I want him to be my husband and be able to use that term because that is exactly what Adam is, my husband, my soulmate, my partner in life. Allison says the love she feels for Adam falls nothing short of wanting to, “Scream from the rooftops.”

And, why does Adam want to marry Allison? He says, “I want to marry Allison because I can’t imagine experiencing life without her. She has this unique passion and energy for life that is contagious. (That may explain the screaming part! - DSG) Allison shares the same values as I do, and she supports me in all aspects of life. She makes me want to push myself to grow individually and as a partner (while loving me with all my faults), and at the same time wants to keep growing in those aspects herself. Allison is kind, thoughtful, compassionate, warm, capable and, the icing on the cake, she just so happens to be incredibly gorgeous.”

What Adam is telling us is that together they make up something that is greater than the sum of its parts, because they make each other want to improve. And Allison adds this, “We know that we need to take care of ourselves and our relationship in order for it to grow.” There, she hits the nail on the head. A successful marriage depends not only on caring for each other and bettering each other. It depends on both people working to care for and better that third entity: the marriage itself. If you are cognizant of that fact, and you keep it front and center, the inevitable trials become easier, and the good times become great. And that, my friends, is most definitely worth screaming about from the rooftops...

Posted by Rabbi David Gruber at 11:37 AM No comments: