Saturday evening, Father Milt Raybould and I co-officiated Veronica and Michael’s wedding ceremony, in the Crystal Ballroom, at the Rice Hotel, in . Here are the remarks I shared with them and their guests:

One of the first things I ask each couple is how they met. Here is an atypical answer to this question, given to me by Michael here, “Veronica and I disagree as to when we first met.” Oh, well… He continues, “My first memory is her sitting right behind me in our property exam first semester of law school. She was having computer issues and I was trying to lighten the mood. Apparently, I failed as she does not remember this interaction.” Ouch! 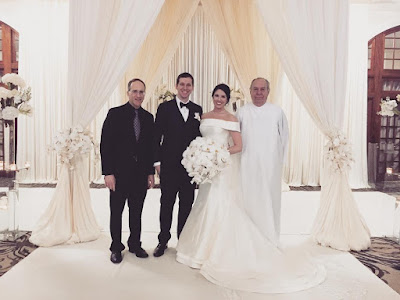 Now, especially, in light of Michael failing to make that memory stick in Veronica’s mind, what she says next might surprise you, “I knew I wanted to marry Michael very early into our relationship. About 4.5 months after we started dating and after a few too many drinks out with friends, I was at his apartment and I remember telling him over and over again, ‘You are IT Michael Gross. You are it for me.’ I knew THEN that he was special, what we had was special, and that I wanted to spend the rest of my life with him.” Michael also says, “I have wanted to marry Veronica for years.”

What was it that brought these two together, and caused them to know so early on that they were destined to be together? Surprisingly (not really), Veronica puts this into words a little better than Michael does, but I believe that she speaks for both of them. From interacting with them, you can see that the feeling is mutual:

“He is an incredible person. He is kind, smart, funny, caring, selfless, giving, thoughtful, intelligent, confident, energetic, and incredibly attractive. He has an infectious energy. He is always putting the needs of others before his own. He is the first to offer help if he sees someone needs it, and goes above and beyond without thinking twice about it… He respects me, he listens to me, and he supports me. He makes me want to be the best version of myself, and he helps me be just that. I have never had to question the love he feels for me and his commitment to me. He is truly my partner and I know that I am his.”

When you feel so strongly about someone, when you know that this feeling is based on the caring and devotion that person shows not just you, but other people, when that person makes you want to be the best version of yourself, is it any surprise that you know early on, that they are the one? Not at all. With that said, let’s catch up to where they were 4.5 months in, and make that law school dream a reality…
Posted by Rabbi David Gruber at 11:23 AM No comments:

Saturday morning, Father Tony O’Donovan and I co-officiated Jenny and Dan’s wedding ceremony, at Wildwood Inn, in . Here are the remarks I shared with them and their guests:

There was something mysterious about the first time Jenny and Dan met. Here is what Jenny says about that encounter: “When I, actually, first saw Dan and he smiled at me, I felt like I had known him before, and my heart was happy that he had come back to me.” This is what Yogi Berra would call “déjà vu all over again.” 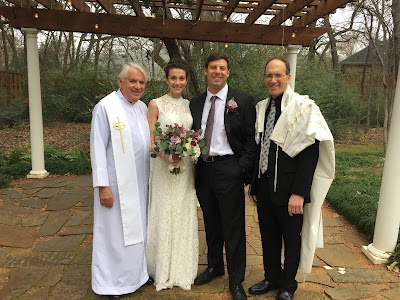 There is, in fact, a Jewish tradition, that likely stems from an earlier Greek tradition, that contends that meeting that special someone is not meeting someone new, but returning to an original partner. The Ancient Rabbis argued, based on specific linguistic choices in the creation stories in Genesis, that the original human was created as one being, both male and female. Then, God put this being to sleep, and separated it into two beings, one male and one female.

Dan tells a story that illustrates this complementary wholeness Jenny and he bring to one another: “Jen and I would often have conversations about the future and I would tell her how important I think math and science are for kids especially in the current digital age. I jokingly told Jen that instead of teaching our kid letters and numbers we should teach them the binary system.” Now, Jenny does, actually, work with kids; she has for her entire career, in one way or another. The binary system, I suspect, did not come up often, in that work. She could not have been blamed for gently pointing this out to Dan. That is not what she did. Here’s what she did do: “One day, I discovered that Jen had created a Pinterest board for me and our future child, complete with science and math books for our future child to read.”

In this Jenny illustrated the proper understanding of the ancient tradition. It does not contend that the two parts of this original being were identical or even symmetrical. That would actually be rather boring, and would contain it very little potential for mutual enrichment. It tells us something very different. When we find that true partner, the one we were separated from, we realize what Jenny did, “I had never felt anything like that before… It just seemed that we fit together, and that he was the one that I had been waiting for, for so long.”
Posted by Rabbi David Gruber at 1:30 PM No comments: