Sunday evening, I officiated Emily and VJ’s wedding ceremony at Winfrey Point, in . Here are the remarks I shared with them and their guests:

Many a romance novel, a play, even a movie, involve secret, even forbidden, relationships.  Emily and VJ’s relationship began this way. Emily writes:

“David and I had found new employment and were both thinking of moving. I asked David if he would move into an apartment with me, and he said that VJ had already asked him. I responded and told him that was fine, that rent was cheaper 3 ways. He said he thought VJ might decline, because he thought VJ might have feelings for me. I replied that that was just stupid, that we were and always had been friends... David talked to VJ, and, voila, we all moved in together.

Things went well for about 6-8 weeks... (Then) VJ and I began seeing each other discreetly. Our connection and affections grew strong quickly, and by the end of February, we told David that we were together. David was simultaneously overjoyed and terrified that his two best friends were romantically involved, and serendipitously declared that if we were going to date, we couldn’t break up, and so we would have to get married.” 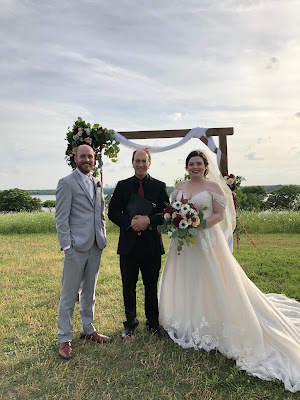 Now, actually, their mutual feelings began long before that period of forbidden love. They were not based on any shallow interactions, mere looks, or random attraction, either. VJ writes:

“I met her three years before we would, actually, start dating. We were both seeing other people at the time, but I remember meeting her for the first time in front of a Cinemax movie theatre, and experiencing a moment that took my breath away. This story has always been one of my favorites of ours because we both experienced it similarly simultaneously. When I first met Emily, what blew me away the most about her was not her beauty, or smarts, or cleverness. It was how clear, it was that she had lived a life without a veil like me and that we were alike. Also, how focused she was on the interactions she was having with others.”

When Emily and VJ share their stories of growing up, you understand what VJ is referring to. They have each had challenging experiences, and have used these very experiences to build a life full of meaning. They first did so as individuals, and in recognizing in each other kindred spirits in this regard, have continued to do so, as a couple.

Their connection is so deep, that it leads VJ to say, “I feel like me and her coming together was decided long before I came into existence, because whenever I make a choice to further my life with Emily it has always felt like I was remembering a time that already happened. The want to try to live a life with her was something already so purely real in my mind.”

Is it any surprise, therefore, that Emily writes: “Wherever we go, and with whatever life brings us, I have endless confidence that we will find immeasurable happiness and solace in difficult times... I could not have been blessed with a greater love. VJ has made the impossible possible. He gives me strength and confidence to embark on our greatest adventure. I know I’ll never be alone. I’ll always have a safe place in him when dark times find us. I know, more deeply than I’ve known anything before, we will build a life and home full of love... I’m eternally thankful that I get to share the rest of my life, love, and joy with him.”
Posted by Rabbi David Gruber at 12:03 PM No comments: 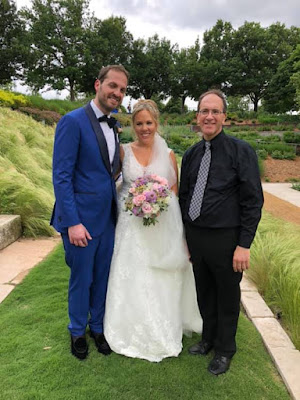 It is this threading of the needle that has allowed them not only to become even better people, but also provide comfort and support for each other in difficult times. That is why they feel profoundly lucky to have found each other. We should all feel pretty lucky that we get to witness this next step in their relationship.
Posted by Rabbi David Gruber at 12:13 PM No comments:

It Will Only Get Better

Saturday evening, I officiated Diana and Damian’s wedding ceremony at Prospect House in . Here are the remarks I shared with them and their guests:

Sometimes the temptation is just too great, that one must succumb to it. After all, there is no guarantee that I will ever be able to say this again: We are here today, because of what sounds like the set up to a joke: An Argentinian Jew and a Vietnamese Buddhist walk into a bar...

Seriously, though, roll back the tape, and one could hardly predict this. After all, Diana says, “You typically can’t find me at a bar during the week.” And, as a rabbi, you’d be kind of disappointed if I didn’t look for the deeper meaning of that chance occurrence bringing us here today, five years later. You would definitely expect me to go a tiny bit deeper than Damian who says, “I went to Marquis II to get a Long Island Ice Tea and met the love of my life. The moral being that Long Island Ice Teas are good for you!” You would expect me to agree with Diana who says, “I believe fate brought Damian and I together.” 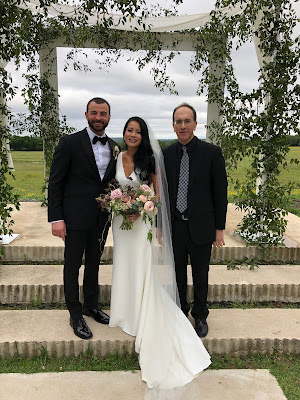 Well, disappoint you I will. I will also do something you usually should never do: Disagree with a bride at her own wedding; at least somewhat. It’s not that I take Damian’s ice tea related lesson to be true; it’s that I feel that fate is not enough to explain what is happening here today. I think Diana is being too modest.

Something she says not about that original meeting, but about their shared life since, is instructive, “I feel like I have been on the best roller coaster of my life and it will only get better from here, as long as I have Damian by my side.”

Not to engage in pop explanations of a 2600 year old religion, but I believe that there is something “very” Buddhist about that depiction of life. Life is a roller coaster. There are ups and inevitable downs. Sometimes your world turns upside down, and the only thing holding you in your seat is the inertia of life and a safety bar. That’s life as fate. That is going to be true regardless of what choices you make.

However, and this may be more existentialist than Buddhist, you can still choose how to relate to that ride, and one of the smartest moves you can make is to find someone you can experience it with. That is what this couple did. They did not just accept their fate; they chose their destiny, to hold on to each other on this roller coaster ride.

Damian is pretty explicit about this: “Diana is my support group. Whenever I had a bad day or when I need to make a tough decision at work or life, she is there for me.”

Diana says this is mutual: “Damian has been my pillar of strength for the past 4 years. He is constantly rooting for me and my biggest supporter. He has been there for me during low and high points in my life.”

This is why Diana says, “It will only get better from here, as long as I have Damian by my side.” And this is why Damian says, “I cannot wait to have my best friend with me every day for the rest of my life.”
Posted by Rabbi David Gruber at 7:04 PM No comments: