Saturday night I officiated Courtney and Luke’s wedding ceremony at the , in . Here are the remarks I shared with them and their guests:

Let’s, Stephen Covey style, begin with the end in mind. Courtney describes Luke proposing, in a way that not only hints at how far back their relationship goes, but how naturally Texan it, regardless of where they may currently live: “Luke proposed... on the 50-yard line of our high school stadium, which we had so many great memories tied to. We were back home... for a college friend’s wedding and got to celebrate with family and friends afterwards. It was a very exciting day, one we both will always remember!” 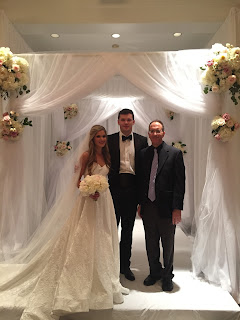 Now, I say this HINTS at how far back they go, because these kiddos actually did not meet in high school. Don’t be crazy. They met in 5th grade.
They didn’t date then, though. They waited until the ripe old age of 9th grade. From then on, Courtney says, they “dated other people off and on but after the last home football game of senior year, we told each other how we felt about each other and dated from that point on. However, in early August, the night before I left for sorority rush at OU, we decided to break up, so we could both enjoy our college experiences. He was going to Clemson and we knew how tough that distance would be.”
The word “we”, which Courtney uses in the phrase, “we decided” is, shall we say, an interesting choice. Here is how Luke remembers it: “While Courtney may say this was mutual, I was never truly onboard for breaking up.”
Uh oh.
Don’t worry, though; he knows she was right: “In hindsight, this was the best decision we could have made, as we were much too immature to have lasted “long distance”. We went our separate ways for several years, though we remained friendly and spoke often. I returned to for medical school, and she to teach, and one day during my second year we went out and have been together since.”
In this, I believe they teach us an important lesson. It’s not only important to be at the right place, be it the or the J.J. Pierce 50-yard line. It’s not only important to be with the right person, no matter when you met them, be it in the fifth grade, high school or medical school. In fact, those two variables might be comparatively easy.
It’s important that it be the right time. And, sometimes, you might think you have hit the right time. You might be utterly convinced of it. You still need to take a step back, be objective, reassess the situation, and not be afraid of where that reassessment takes you. And, if you do it right, you might just end up, like in the fairy tales, happily ever after.
Posted by Rabbi David Gruber at 11:01 AM No comments: