Friday evening, I officiated Jess and Daniel’s wedding ceremony at Event1013 in . Here are the remarks I shared with them and their guests:

One of the things that struck me about Jess and Daniel, from the first moment I met them, is that they are very spiritual people. As Daniel says, “I’m still on this spiritual journey of faith.” This journey has been nourished by their relationship. As Jess says, “When I met Daniel his love for God shined so bright. And I started knowing God through my relationship with Daniel.” In that context, Daniel’s framing of the genesis of as well as the ongoing aspects of their relationship is instructive. “Meeting Jess has been a blessing. I’m excited to see where our path will take us,” he says.

There is something profound in the second half of that statement. You see, in marriage we affirm that not only does the I of today love the you of today, but that my love of you and my knowledge of you makes me confident enough to state that the I of tomorrow will love the you of tomorrow just as deeply. In marriage we affirm that though we cannot predict the future, our love will remain, and the blessing shall endure. 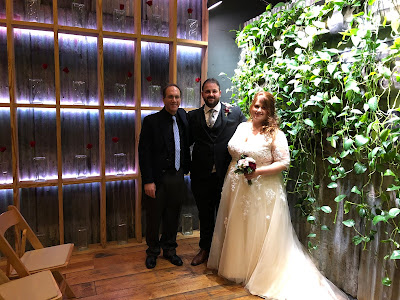 This is just one of the reasons the Ancient Rabbis saw God’s work in this process. They arrived at this through asking a question: In the Bible, God is extremely busy in a very visible way. He’s creating the world and striking the Egyptians with plagues. He’s parting the first and the River Jordan next. He’s raining fire on Elijah’s altar, and saving his servant, Daniel, from the lions. He doesn’t really do any of that flashy stuff anymore. What has he been doing with his time, ask the Rabbis?

They tell us that he spends most of his time playing matchmaker, helping soulmates, like Jess and Daniel, find each other, so they may fall in love, build relationships together, and marry.

The timing of Jess and Daniel’s wedding follows a meaningful spiritual tradition too. Jews in the Russian Empire were confined to a specific area called the Pale of Settlement. They lived in the shtetls, small villages, immortalized in Fiddler on the Roof. They could not own land and were confined to mostly low-paying professions, which kept many of them in perpetual poverty, if not outright serfdom.

It was, therefore, not uncommon to marry on Friday afternoon, so the usual festive Friday night Sabbath meal could double as the festive meal that accompanies a wedding. This is what we might call today a money saving hack.

There was and is, however, something very spiritually appropriate about this timing too. In fact, every Friday night, Jews the world over greet the Sabbath as a bride, with these words of a medieval mystical poem, “Come my friend, toward the bride; let us greet the Sabbath.” Indeed, The Sabbath enriches and restores a person’s soul, as does marriage, and marriage gives us a taste of paradise, as does the Sabbath.

Jess and Daniel, what we wish for you is that the same spiritual reverence with which you enter your marriage and enter tonight’s Sabbath remain with you, that it continue to enrich your souls and that through it you receive your own taste of paradise.
Posted by Rabbi David Gruber at 12:01 PM No comments:

There’s an App for That!

Sunday afternoon, I officiated Christie and Alan’s wedding ceremony at the Verona Villa, in . Here are the remarks I shared with them and their guests:

How did we arrive here today? Like in most cases today, through an app that connected Christie and Alan. No judgment, but at this point in history, if a couple didn’t meet through an app, people raise an eyebrow. What? You met at a bar/at work/at the gym?! How eclectic!

Of course, there is some dispute regarding where the app was, and who used it, in this case. Christie and Alan say it was on their phone, and they used it. Alan’s mom disagrees. She says the app was a little more analog, shall we say, and it was all her doing. That’s right; she followed an ancient Jewish custom and placed a written prayer request on a note in the crevices of the Western Wall in . Now, I haven’t seen the analytics on that specific app, but if history is any indication, it’s way better than any Mickey Mouse phone app, so put me down in mom’s column on this question! 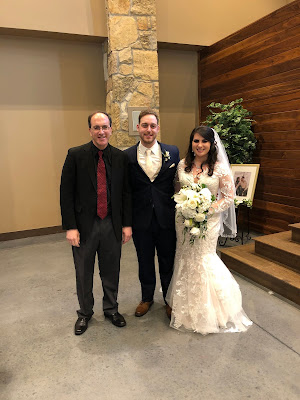 Now, going a little analog, shall we say, is a theme in the maturation of Christie and Alan into the well-rounded persons they are today. They both admit that they were a little hard charging, before they learned to slow down.

Christie says, “All through college I worked, I studied, I grew into the person I was working to be. I never took a summer off. I squeezed my entire bachelor’s into three years and graduated having already worked a year into my first job. I always felt like I had to be ahead of my peers. Most likely, because I had this drive to become the best version of myself, I could be. And to me, that was limitless, and still is very much today...

Today, I still strive for the future, because it is so damn exciting, but also, I have… learned to find peace in the now. I have recently learned to slow down, enjoy the little things and the big things that life throws at us. From every ‘I love you’ from Alan to every morning run…”

Alan says, “Being so family centric put me on the road to search for someone to love from an early age. Thoughts like, ‘One day I’ll have a strong, healthy, respectful love with my wife, like my parents do, to raise a happy family…’ were deeply ingrained in me from an early age…” As a consequence, he says, “Throughout my relationships over the years I attempted to force myself to fall in love… I failed in each attempt and burned out.”

So, Alan gave it a three year hiatus, and then due to whatever app it was that connected him to Christie, he says, “I decided to go with the flow (which is very unlike me) and that is where I found my soon-to-be wife.” He adds that when Christie arrived at their first date, “I thought she was too pretty to be my date, but when she came up to me and confirmed that she was, in fact my date, I was stunned. The date went exceedingly well; we had a wonderful conversation and were even approached by an elderly couple asking what anniversary we were celebrating because we looked so happy together.” That definitely qualifies as old school analog!

So, the lesson for today is pretty simple, friends, follow the example of Christie and Alan: Plan for the future, do your very best to make it happen, but don’t forget to slow down and go with the flow. That type of balanced approach will take you far…
Posted by Rabbi David Gruber at 12:07 PM No comments: