Saturday evening I officiated Amanda and ’s wedding ceremony at The Joule in . One of ’s claims to fame is that he recently won the Dallas Marathon, an achievement not attained by any other American in thirteen years! Here are the remarks I shared with them and their guests:


Some of the best lessons couples have taught me have been, interestingly enough, unconscious lessons, lessons they may not have realized themselves.


Amanda tells a fascinating story about her childhood: "Friday nights were a particularly special time for us, as my dad often played his guitar in family services. I remember thinking he was 'famous' and I admired him so much for standing up in front of our entire congregation to sing." Now, Amanda wrote this about her dad, a good few months before someone else here actually became famous, having done something that no American had in thirteen years.


But, of course, that is not where Amanda's story about her dad ends. She adds, "I loved seeing the joy in my mother’s eyes as she watched him up there. The twinkle in my mother’s eyes that I noticed at Friday night services was the twinkle she had from knowing she was in love. That sparkle comes knowing the man she was sharing her life with was her best friend, team mate, and confidant." 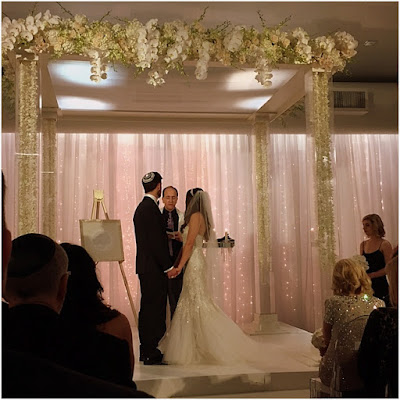 So, yes, the child-Amanda thought her dad was famous. However, even then it was clear to her that that was not the point, and that was not what mattered. What mattered was her parents' love story, that they had written together. And so, many years later, Amanda wrote, "That’s what I wanted, and that’s what I found when I met ."


tells a fascinating story too, regarding how he met Amanda. It involved a woman named Alix, who is present here today. She's the one over there, who will start blushing in about fifteen seconds. writes, "I had never met Alix, but I could tell she was a strong presence. She kept asking me if I was dating anyone and wanted to know my dating history. I felt like I was being cross-examined. After a few minutes she said, that I was going to meet her cousin, fall in love and get married. Then she took my cell phone, friended Amanda on Facebook and put her contact information in my phone." Beyond the obvious humor, and extraordinary intuition, this exhibits that same idea inherent in Amanda's childhood tale. Alix predicted that they would write a story together, one that would be very special.


And why does want to write his love story, or rather continue to write his love story with Amanda. He tells us, "Amanda carries all the qualities that I have looked for: caring, loving, supportive and patient." Here is where he gets a little meta in this context, "She cares to know people on a deeper level and understand what in their past has affected the way they are today." So, intriguingly, he desires to write a shared love story with her, because she so cares about other people's stories!


What Amanda and Logan teach us today is that what really matters is not how many people know our name, and not what someone someday might say about an external achievement. What matters are the stories we write together with our lovers and with our loved ones. Because in the grand scheme of things, when we are all long gone, those stories of love and the meaning inherent in them will long live on.
Posted by Rabbi David Gruber at 10:09 AM No comments: