On Friday 6/28, I officiated Ginny and David's wedding at the White Elephant Hotel in . Here are the personal remarks I shared with them:

I love the fact that Ginny and David met at culinary school. Why, you may ask? Well, because what is learned in culinary school vs. how most of us "cook" is a perfect analogy for real love vs. fleeting romance.

You see, most of us do our "cooking" by nuking something for a minute or two in the microwave. In culinary school, the philosophy is that if you can make it in a minute, it is probably not worth eating. Heck, just learning how to prepare a good stock, that will then go into future recipes, is done deliberately and slowly.

In the realm of love, it is much the same. Love at first sight is something that is more the stuff of legend than fact. Real love, like in Ginny and David's love story, starts with a firm foundation of friendship, the stock upon which the dish of love may be prepared, if you will. Then it develops gradually and deliberately into a deepening love story, becoming richer and richer with flavor.

This fact about Ginny and David’s love story reminded me of a fascinating passage written by Reinhold Neibhur, one of the greatest theologians of the previous century. Neibhur taught at Union Theological Seminary in , and is buried right here in . Listen to this; it is like poetry:

Wow. In our instant gratification world, can there be a more important message? So let us resolve today, like Ginny and David did in developing their relationship, to be deliberate, to give things time, and in Neibhur's words, "be saved by love."

Posted by Rabbi David Gruber at 3:54 PM No comments:

Loving You Is Easy 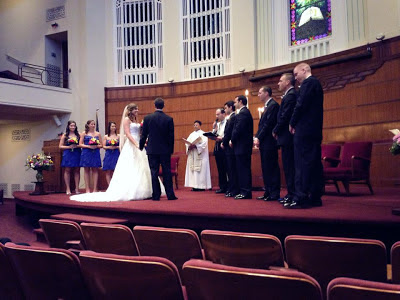 On Saturday 6/15, I co- officiated Marybeth and Brian's wedding with Father Lazar Carasala at the landmark Unity Temple on the Plaza in Kansas City, Missouri. Here are the personal remarks I shared with them:

I ask every person I marry to write an autobiographical essay, so I can get to know them a little better. We review these essays in our second meeting. I always suggest that a couple not read each other's essays, before the meeting, as this can not only allow for deeper personal reflection, but frankly spice the meeting up a little...

One of the fascinating things that Marybeth and Brian both mentioned in their essays, is how easy their relationship feels. Marybeth says, "Our personalities just click and being with him is so easy. We have so much fun together and he truly makes me feel so happy.  He is the one person that can always put a smile on my face no matter what." Brian says, "She always puts a smile on my face and is the easiest person to spend time with of anyone that I’ve ever been around. We never run out of things to talk about..."

Wow. How simple yet profound. This reminded me of one of my favorite songs by Sarah McLachlan. She sings, "Loving you is easy. Loving you is wondrous and pure... Caught up in the sparkle in your eyes... You light me up; you take me higher... I found it fresh and new again with you."

Fresh and new indeed! Not to discount the entire self help section of the local bookstore, and though one should never make light of the differences between men and women, isn't the problem many times that we just over complicate things in life?! The lesson that Marybeth and Brian teach us is that it really need not be so. May we all learn from them, and be so lucky to experience love that is easy, wondrous and pure.

Posted by Rabbi David Gruber at 6:51 AM No comments:

An Adventure of Serviam

Yesterday, Sunday 6/9, I co- officiated Erika and Gidon's wedding with Father Marty Hunckler at the Broadmoor in . Here are the personal remarks I shared with them:

One of the most fascinating books ever written is Maimonides' Guide to the Perplexed. In this book, the great rabbi, physician and philosopher of the 12th Century considers the relationship between Greek Philosophy and Jewish Thought. What better starting point for personal remarks at
the wedding of two practitioners in the world of
medicine, who are also contemplative individuals.

One of the interesting things that Erika and Gidon share is the sense that life is and should be considered an adventure. Now, some people hear that word, and imagine a life of abandon, where one throws caution to the wind, but that is not what adventure is about. Adventure is about understanding what is really important, relishing it, and with that living every moment to its fullest.

A great example of this, is the story of Alexander the Great's encounter with Diogenes. The general, whose childhood tutor was that other famous Macedonian, Aristotle, was so excited to meet another renowned philosopher. As he came upon the minimalistic Diogenes, he saw him lying in his sole possession, a barrel, deep in philosophical thought. He told Diogenes who he was, and said that he would give him anything he asked for. Reportedly, Diogenes said he only had one request. If this man who conquered the whole world would not mind, could he move a little, as he was blocking the sun... Legend has it, that Alexander was far from offended, and exclaimed, "If that I was not Alexander, I would be Diogenes!"

Now, of course, and this is the core of Maimonidean Thought, Diogenes leaves out one important element, one well understood by Erika and Gidon. In one of my discussions with Erika and Gidon, Erika talked about an idea she was taught in Catholic school, that still infuses her daily life, and has guided many of her life choices. It is usually summed up in one Latin word, Serviam, to be of service. Maimonides indeed reminds us that contrary to our friend, Diogenes, to live a good life, one cannot live in a barrel. We are called to help others, to serve.

Interestingly, this is not only at the core of Erika's being. She says, with no irony and with this in mind, that Gidon, 100% a Jew, is one of the best Christians she knows. In this, of course, she does not mean a believer in Christianity, rather she means that he lives his life in a manner consistent with this Judeo-Christian idea, that one cannot live a full life, if one is not of service to others.

Erika and Gidon, what we wish for you is that you carry on this great idea. Continue to live your life as the great adventure it can be, while always being of service to others. In this, may you find great happiness, fulfillment, and peace.

Posted by Rabbi David Gruber at 11:42 AM No comments: