Saturday evening, Deacon Chris Volkmer and I co-officiated Becca and Ryan’s wedding ceremony in . Here are the remarks I shared with them and their guests:

I ask every person I marry to address a few questions in writing. One of them is why do you want to get married now? Ryan, who if you have paid attention to the ceremony so far you may have noticed is Catholic, does a very Jewish thing when answering that question; he answers it with a question! Incidentally, do you know why we answer questions with questions. The answer is, why not?

Anyway, Ryan says that the real question should be, and many couples’ parents ask this all the time, why not marry sooner? He blames it on his having “galavanted to ,” which, let’s face it, 99% of the time makes sense, regardless of the question. 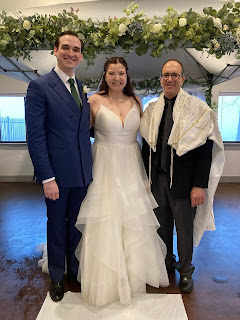 Many of us have thought about time and timing more than ever before, in the past year. Our awareness of time’s elasticity has heightened. Our inability to schedule the mundane and the extraordinary has affected each and every one of us. And so that why now question I have been asking couples for thirteen years has taken on new meaning.

One of my mantras is that there is no right or wrong way to do anything in your wedding; it really depends on the couple. Similarly, to quote the writer, David Plotz, another person’s marriage is a foreign country. That said, I believe that if a couple focuses on what really matters, in their wedding and in their marriage, they can and will make their marriage rise above the constraints of time. Becca and Ryan exhibit a deep understanding of this, maybe more than they know.

Becca says, “Ryan and I have been through a lot together… We’ve been there during good times and bad times… It’s not always easy, but it’s always worth it. I’ve wanted to marry Ryan for a long time now. I can’t imagine a life without him, especially now, as we… create a home and family together, amidst such uncertain times.”

And Ryan says, “I want to spend my life with Becca. I’ve loved her since the moment I saw her. But marriage is more than love; it is commitment and an unbreakable union. Becca is my partner – and I want to be partnered with her forever.”

Posted by Rabbi David Gruber at 7:52 PM No comments: