Saturday evening I officiated Lauren and Doug’s wedding ceremony at Arlington Hall at Lee Park, in . Here are the remarks I shared with them and their guests:


The morning I sat down to write these remarks, I saw a picture that Lauren's friend, Monica, posted on Facebook. There she was with Lauren, at Scarpetta's in and Lauren was wearing a sash that said, "Bride to Be". Astute observer that I am, I understood that this was Lauren's bachelorette party. There were a number of hashtags used: #, of course, and #hellomrsgreenspan, but this one I liked the most was #sayidotothejew. Priceless!


Interestingly, just a day or two prior to writing these remarks, I was talking to another couple about how, officiating weddings in other parts of the world, I couldn't help but notice that Europeans and Latin Americans use sashes way more liberally. You know that person is Mayor or President, because they have a sash! Why don't we do that more in the ? Aren't we, especially in places like and , SUPPOSED to be flashier?


Anyway, the bride to be sash and the hashtag #sayidotothejew reminded me how wonderfully lucky we are to live in the time we do. Some people pine for a world of yesterday, but not me. 100 years ago, even 40-50 years ago, the society we lived in was very different. In that society, if Lauren and Doug could even get married, they probably would have to do so quietly, maybe at the county clerk's office. There would be no sashes and no hashtags. Perhaps, they would never have gotten married altogether. 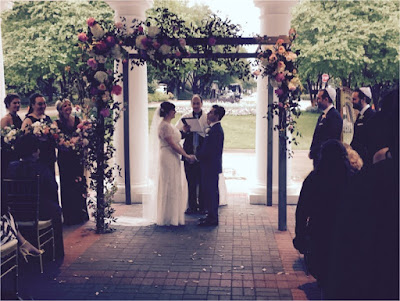 What a profound loss that would have been! How do I know? Just listen to the way they describe their relationship. Lauren says: "I knew Doug was different as soon as I met him. He really listens to my needs and cares about me... Being with Doug made me realize that what the two of us had doesn't come along very often... Even though we spent most of our lives apart, we have the same values. Our relationship has deepened naturally and effortlessly and I know he is the only one for me."


Wow! Now listen to Doug, who begins with a description of the beginning of their relationship, and talks about some of the practical aspects of their relationship: "We spent the next couple of weeks going on dates and spending a lot of time together. It quickly became clear that this was someone that was special. Our conversations flowed. I thought she was beautiful and fun. I also thought it was really great how many friends she had and how they all said such nice things about her. She had friends from back in high school (some of them were her roommates) that reminded me of my friendships with my friends from back in the day. I think it says a lot about a person when they can keep friends for so long because in every relationship there will be ups and downs. The important thing is how you deal with them. I think I'm a pretty practical person and this showed me that she was as well. I love living with her. I am forced to keep the place cleaner than I might otherwise would on my own but that's for the best. She's always appreciative of my cooking and I always enjoy cooking a meal for the two of us."


The mutual appreciation and love that is expressed by this couple is summed up well in what Lauren adds: "I never could have imagined that I would be marrying such an amazing guy and that the relationship I would have with my future husband would be as loving and warm as it is."


One of the reasons given for the breaking of the glass, that will close out this ceremony, is that it is to remind us, even at a time of great happiness, that the world is still broken. It is hard to argue with such a statement. However, the extension of that statement should not be a pining for yesterday. As Lauren and Doug show us, in words and action, the world of today, the world that allowed them, in a matter of fact way, to openly court, fall in love and marry is better than any imagined utopian yesteryear.


Indeed, the world we live in today is worthy of a special ancient Jewish blessing for happy times and occasions, a blessing that Lauren and Doug's wedding day is well worthy of: "Blessed are you Lord, our God, Ruler of the universe, who has given us life, sustained us, and brought us to THIS time."
Posted by Rabbi David Gruber at 2:05 PM No comments:

On Saturday I co-officiated Veronica and Jeff's wedding ceremony with Padré Hugo Landeros, Antigua Hacienda de Dolores, in . Here is what I shared with them and their guests: 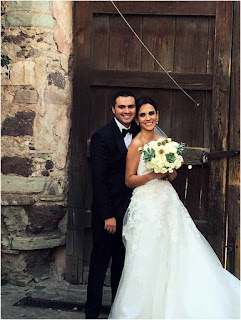 Like most Americans, I did not know anything of Guanajuato, before Veronica and Jeff asked me to co-officiate their wedding. So, naturally, I was like, why Guanajuato? Once I looked into Guanajuato, I feel like now I need to ask other couples, why NOT Guanajuato?! I mean it is not every day that you get to visit a city that is in its entirety an UNESCO world heritage site! What an honor to co-officiate a wedding ceremony in such a beautiful city.
Now, interestingly, I think that there is a specific connection between Veronica and Jeff's relationship and this city. I am not even sure they realize this connection. What do I mean by that? Well, Guanajuato has many claims to fame. However, if I may be so bold as to single out what I think are the two most important of these, I would say they are, Guanajuato's rich natural resources, and its centrality in the story of 's independence. The riches found in the soil of this city are legendary. And the spirit of the Mexican fight for independence which sprung from that very soil is the stuff of legend.


How does that connect to this couple? Well, when you listen to Veronica and Jeff tell you about the birth, the beginning, the inception of their relationship, you get the sense that it was so effortless, so natural, that it was as if it was embedded in them already, like the riches in this soil. Now, of course, with relationships, as with the founding of nation-states, even if something had natural potential you can't just rely on that. As any behavioral professional, like these two, will tell you, relationships require effort. And Veronica and Jeff have invested and continue to regularly invest in the joyous work of growing their loving relationship. That is how in the years that followed, they have kept that freshness and natural richness of their love story alive. That my friends, is why Guanajuato's story is Veronica and Jeff's story too. That is why this place is so perfect for making their love story official.
Posted by Rabbi David Gruber at 9:40 AM No comments: