A Legacy to Leave for Those Who Come After Us

Saturday afternoon, Father Michael Mills and I co-officiated Carly and Aric’s wedding ceremony at the Episcopal Church of the Good Shepherd in .

Carly and Aric’s marriage is an intermarriage. He’s from , she’s from , a state that is 54 times smaller than ours. He fights fires and she studies at a small obscure school outside of that you probably have never heard of. Finally, I really hate to bring up such a painful divisive subject at their wedding… he’s a cat person and she most definitely is not.

On a more serious note, if you really think about it, unless you happen to be an ancient Pharoah or Ptolemaic king who is marrying his sister, every marriage is an intermarriage. After all, every family is different, and the definition of “normal” for most of us is “how my folks do it.”

So, how do you prepare your children to be successful in their intermarriage? Honestly, the answer might be simpler than you think, which makes it a little infuriating that too few people follow the example of Carly and Aric’s parents in how they raise their children. 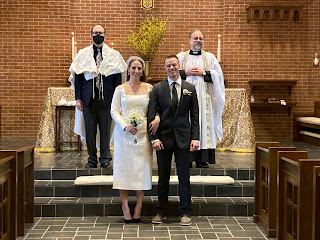 Carly says, “I was always very happy and outgoing. My mom is Protestant, and my dad is Jewish, so we went to church on Easter and Christmas and to temple on the High Holidays. I was able to gain an appreciation for the traditions of both religions.”

Aric says, “I started attending church when I was in middle school at Good Shepherd. I had many friends of Christian and Jewish faith when I was growing up, so I was exposed to many of the lessons and traditions of both faiths. I attended a Catholic high school and studied many semesters of theology and spirituality. The more I studied, the more I realized nobody has the answers…”

The number one prescription for an UNSUCCESSFUL marriage is thinking that YOU have all the answers or even thinking that there ARE definitive singular answers to most questions. What Carly and Aric are telling us is that not only do they know that this is untrue; they know this because this is how their parents raised them.

What Matthew, Natalie, Richard, and Blair teach us is that we should raise our children to be humble, to know that they do not have all the answers. If we do that, we stand a chance of not only ensuring that our children will be more successful in life, but that they will be more successful in love. I cannot think of a better legacy to leave for those who come after us.