Monday evening (3/15), I officiated Amanda and Adam’s wedding ceremony at the Rustic Grace Estate, in . Here are the remarks I shared with them and their guests:

The story of how Amanda and Adam met occurs at the hilariously named bar, Scruffy Duffie’s.

Adam says, “I had just arrived and was standing around when I noticed this beautiful girl standing over by the bar with one of her friends… A few minutes later… my back turned… I felt a tap on my shoulder. It was the friend… She asked if I would be interested in having a drink with her friend… Amanda...”

In Adam’s telling, this is a pretty innocuous story. It is much more exciting in Amanda’s telling: “I… had sworn off men entirely. (Ouch!) I saw him across the room and told my friend I thought he was cute, and she immediately ran over to him and told him what I said. We started talking and the rest is history!” Wow. I don’t think I have ever said this at a ceremony, Adam, but thank you for restoring Amanda’s hope in our entire gender. Don’t let it get to your head. 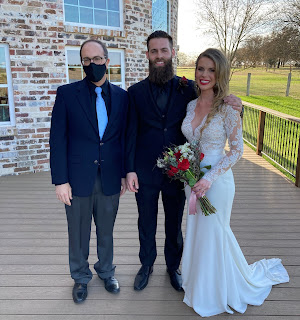 Now, it’s not like Adam restored her positive view of half of humanity that very evening. However, that evening sparked something in her, that she was willing to, cautiously, give it a chance. Essentially, she was saying in the words of Bebe Rexha: “I don't mean to be so uptight, but my heart's been hurt a couple times... I ain't gon' lie, ain't gonna lie. ‘Cause I'm tired of the fake love, show me what you're made of, boy, make me believe.” And Adam was essentially saying to her in the words of Florida Georgia Line, “Baby, lay on back and relax… no need to go nowhere fast, let's enjoy right here where we at. Who knows where this road is supposed to lead, we got nothing but time… If it's meant to be, it'll be…”

That openness, that willingness in the words of the chorus to, “see where this thing goes,” paid off. Amanda discovered that, in her words, “Adam has the biggest heart… of anyone I have ever met. He is someone that will give you everything he has to offer and expect nothing in return. He instantly accepted my children as his own, and I know he will always have their best interest. He takes such great care of us, and I feel so lucky to have found him.”

And Adam says, “She is the girl I’ve been waiting to meet my entire life. She is sweet, thoughtful, a wonderful mother and brings out my best qualities when we’re together. We’ve dated now for just over three years, and it has shown me that no matter what we face, we always rise above it and overcome any challenges that come our way.”

I don’t know about you folks, but it sounds to me like this was most definitely, “meant to be.”

Posted by Rabbi David Gruber at 9:38 AM