A Love as Strong as Ours Deserves the Respect of Marriage

Saturday afternoon, I officiated Katie and Grant’s wedding ceremony at Blissful Hill in . Here are the remarks I shared with them and their guests:

It is hard to generalize, however, most successful relationships, as time passes, toggle between two states of being. They deepen every day, while continuing to preserve the sense of freshness that came from the first time you met. If you will, they are at once Carly Rae Jepsen’s, “Hey, I just met you and this is crazy, but here's my number, so call me maybe,” while at the same time Pablo Neruda’s, “So close that your hand on my chest is my hand, so close that your eyes close as I fall asleep.” (Hopefully, the literary gods will not strike me down for comparing the two artists…) 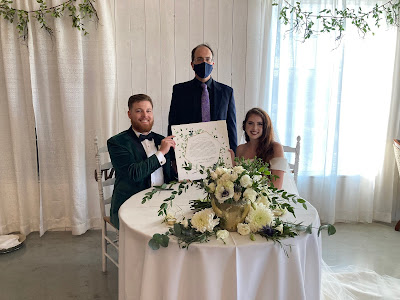 You sense that Katie and Grant have this figured out. Check out the beginning of their story. Grant says, “I took her to a sushi date which turned into another [thing to do] and another thing to do. The date lasted over ten hours. I went home that night and just slept. I knew she was the one.” Katie says, “He was funny and care-free, and it felt as though I’d already known him forever.” And, she adds, “We count that date as our anniversary because we pretty much knew from that point on there was nobody else for us.”

One of the reasons their relationship works is because Grant says Katie is, “an enigma. Katie’s energy has always been something magnetic. She can talk your ear off, and I love that about her because I don’t like to talk much most of the time.” Katie elaborates on that specific point saying that Grant is her, “best friend and that’s what makes it different from every other relationship. Grant balances me in many ways and pushes me out of my comfort zone with his hobbies.” And, in case you were wondering, yes, that includes hobbies the average city girl does not engage in, unless she marries a self-described “good ole country boy,” hunting and fishing!

Their relationship has actually been put to the ultimate test, one that would have made no sense to a time traveler from just a few months back. As Grant says, “I’ve been around the world with her… I’ve cooked with her, I’ve watched shows with her, and now (wait for it…) I’ve been quarantined with her.” And that experience led him to say, “I’ve come to realize that no one will ever be a better life partner than Katie.”

This is why Katie says, “I can’t imagine my life without him. If it were up to me, I would’ve married him three years ago.” This is why Grant says, “A love as strong as ours deserves the respect of marriage.”