One of the most unique weddings I have officiated was Shreeti and Jon's. I co-officiated with Shreeti's family's lay pundit (Hindu priest), Jaysurya ("Jay") Upadhyaya. It was fascinating to see how these two faiths, one Western and one Eastern, came together in one ceremony, and how many parallels exist between the wedding rituals of both.

The ceremony began at the entrance, with Shreeti's mother waving a wand over Jon to cast away spirits. This Hindu tradition is similar to the Jewish tradition of beginning the ceremony with the bride and groom's mothers leading the bride around the groom to similarly protect him. In accordance with Hindu tradition, Jon then broke a clay pot to symbolically remove any obstacles to the marriage.

The ceremony itself was held under a mandap, a Hindu ceremonial canopy that turns the whole area under it into a symbolic altar. This served also as the Jewish chuppah, which symbolizes the bride and groom's new home. Interestingly, both faiths center around the home, rather than the house of worship, which means that home and altar are very much one and the same.

At various points during the Hindu portions of the ceremony, people made offerings to different deities. This usually involves Sanskrit chanting by the pundit, the tossing of the offering into fire and the marking of the body with paste. These are very important parts of the ceremony, as the favor of the deities is seen as central to a life of happiness for the new family being created under the mandap. The Jewish portions of the ceremony do not involve offerings, but do involve the chanting of blessings in Hebrew. I opened the Jewish part of the ceremony with traditional, welcoming blessings and towards the end blessed the couple with the Priestly Blessing.

In a Jewish wedding, parents and loved ones are brought under the chuppah with the bride and groom. This is true of a Hindu wedding too. Shreeti's parents spent part of the ceremony under the mandap, made an offering and even washed Shreeti and Jon's feet, beseeching him to treat their daughter as an equal partner. Later in the ceremony, family members from both sides, including Jon's parents, joined Shreeti and Jon under the mandap, and made offerings, which the couple, circling a small altar four times, threw into the fire. The circling symbolizes the couple's commitment to remaining true to one's values, providing for the family, obtaining fulfillment and achieving enlightenment. Every time they circled the altar, siblings and cousins, who had surrounded the mandap, pelted them with flower petals. Later, after the ceremony, with their families once again surrounding them, the couple would sign the Jewish ketubah, a document where they would commit themselves to essentially the same ideals celebrated while ringing the altar.

One of the most striking resemblances between the wedding traditions of both faiths is the centrality of the number seven. The Hindu tradition has the Satapadi or Seven Vows, and the Jewish tradition has the Seven Blessings. Jon laid Shreeti's big toe on each of seven decorated shells respectively, while Jay chanted the Satapadi, swearing the couple to live with honor and respect, be happy, share in all, not forget their elders, be charitable, be peaceful and love and sacrifice for each other. I followed with the chanting of the Seven Blessings, which celebrate creation in general, creation of man, creation of woman, the hope of return to Zion and the love and happiness of the bride and groom and their loved ones.

Both traditions include the bride and groom sharing sweet food (in Hinduism) or sweet wine (in Judaism) to symbolize everyone's prayer that the couple will enjoy a sweet life together. Shreeti and Jon shared candy and dried fruit, in accordance with the Hindu tradition.

Jon then put a necklace on Shreeti's neck, the Hindu equivalent to putting a ring on his bride's finger. (Both faiths, being in their traditional form patriarchal, have the groom putting the jewelry on the bride and not vice versa.) Shreeti and Jon then read very meaningful vows they wrote, after which they exchanged rings, reciting (in Hebrew and in English) the traditional Jewish consecration formula, as well as a verse from the Song of Songs.

After I declared them husband and wife, Jon ended the ceremony, just as he started it – by breaking something. This time, in accordance with Jewish tradition, he broke a glass. I explained it as symbolizing the breaking down of barriers between different cultures and faiths – a very fitting explanation for this wedding.

How did Shreeti and Jon, coming from traditions, far apart geographically and theologically, "pull off" such a seamless ceremony, where it was well evident that all present felt so validated and comfortable? They communicated their plans to their families, and sought their feedback. Their parents gave them honest and considerate feedback while respecting the couple's wishes. Shreeti and Jon chose officiants who were open to learning about each other's faiths and communicated well themselves. These officiants were keen on making the various parts of the ceremony mesh well together. Most importantly, while each family expressed their wishes to observe various rituals from their respective traditions, it seemed like they were even more careful to make sure that the other side's wishes were being met.

It was really heart-warming to observe how concerned these people were regarding each other's feelings. It has been said that true love means caring about your loved one's feelings, as you much as you care about yours. This couple, their families and all involved showed this type of love, and as Mahatma Gandhi once said, "Where there is love, there is life!" 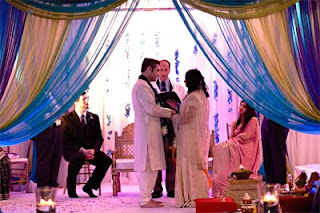 The bride and groom under the mandap, which also served as the chuppah. (Photo Courtesy of Chavvon & Larissa Photography - www.chavvon.com)

I spent the last weekend with Lauren and Ryan and their families. Here are some words I shared with this wonderful couple:

I wanted to focus on one particular quality that I feel is one of the most important for a person to have, one that is in short supply, but which Lauren and Ryan have been blessed with – humility. The first thing that humility allows you and encourages you to do is to not take yourself too seriously. Not taking yourself too seriously is, well, a serious issue! Why? This is easiest to understand through the negative. Think about someone you know, and we all know this someone, who takes him or herself way too seriously. Now you understand why that is important. Humble people, like this couple, who can laugh and joke about themselves, are much more pleasant to be around.

Humility also means that it is much easier for you to be self reflective. Lauren and Ryan definitely have shown in their lives apart and together, that they are able to take stock of who they are and where they are in life. This is vital, since as they and many others have experienced in the last two or three years, life will come at you, and throw you some curveballs from time to time. If you are nimble in your ability to self reflect, you will be more adaptable to different and new situations. You will be able to take appropriate action, whereas the person who has difficulty with self reflection will still be frozen in the past.

The most important aspect of humility though, in my opinion, is a true sense of wonder. When you are humble, and don’t think more of yourself than you should, you are able to open your eyes, look around you, and discover a wonderful and fascinating world out there. You will by necessity live a life of adventure and discovery. (This is true, by the way, on a personal and national level.) Lauren and Ryan are very explicit about this aspect of their life. It is clear that they try to take in the world together, and live their lives in a way, that, I think, is the best way to live it. They live their lives with the clear recognition that life is a journey where one needs to concentrate not on the destination, but on the journey itself.

So, Lauren and Ryan, thank you. Thank you for reminding us just how special life can be, if we have the right outlook and perspective. Hold on to that. Now look into each other’s eyes. As the years go by, make sure you take a moment here and there to stop and look into each other’s eyes like you are now, and wherever you are, whatever is going on in your lives, remind yourselves, remind each other, to seize the day, and live your lives together to the fullest, like you are today.
Posted by Rabbi David Gruber at 3:38 PM No comments:

Relationships Are What Makes the World Go Round

Yvonne and Reed, one of the great things about working with a more “seasoned” couple like you, Yvonne and Reed, is that you have gained some wisdom that comes from having been “around the block” once or twice. You have learned some lessons that one cannot learn in the classroom, rather need to be experienced in the school of life. One of the central things you emphasized in our discussions is that while you have each worked very hard get to where you are today, your relationship has reminded you what is really important in life – your relationships, the love that you have found with each other, and the love you have for your children.

Now, you may say, duh! If, however, you have paid attention to what is going on in the world today, you will understand how much this message is a needed one for us all. You see, modern life can sometimes make us forget that material possessions are just tools, that they cannot really fulfill our dreams. We sometimes forget that it is our connections and relationships that make us who we are. We sometimes forget as individuals and as a society, we need place supreme value on our spouses, our children, and our friends, so we may find true lasting meaning and happiness in our lives.

So, Yvonne and Reed, thank you for reminding us of these important lessons. We hope and pray that you will hold on to these important values. With the hustle and bustle of life, that can sometimes be a tall order. So, here is a suggestion. Look into each other’s eyes. (Yes, now…) As the years go by, take a moment here and there to look into each other’s eyes like you are now, and remind yourselves of what is most important in life – your relationship with each other, your connection to your loved ones, and your caring for others.
Posted by Rabbi David Gruber at 4:50 PM No comments: