The Road to Our Full Potential

Saturday evening, I officiated Kiandra and Zach’s wedding ceremony at The Olana in . Here are the remarks I shared with them and their guests:

Kiandra and Zach are very clear about what they do for each other. Zach says, “I have thought about her every day since [I met her]. She makes me want to be a better person, not only for her, but for myself. No one has given me more confidence…” And Kiandra mirrors this, when she says, “I want to marry Zach because he has the kindest heart… He’s always looking out for the people that he loves and [he] wants them to feel as special as he believes them to be.” 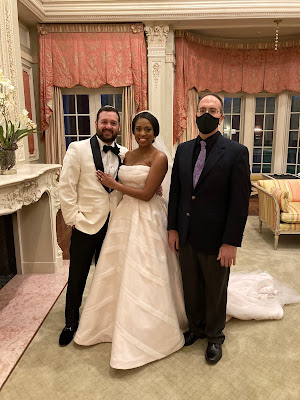 Now, you might find what they say simple and straightforward, and it is, but there is also tremendous depth here. Essentially, what they are saying is that each helps the other, as well as others, live up to their full potential. You might think this is obvious; isn’t that what marriage and life are and have always been about?

Well, in a word, no. Until very recently, living up to your full potential in life, in general, as well as finding that partner who through marriage could help you do just that, was far from a given. Even today, though we have traveled quite a distance, barriers on the road to our full potential have not been fully taken down.

And yet this striving for reaching your full potential has always been embedded in our tradition, both regarding life, in general, and marriage, specifically. Indeed, this is one of the reasons that the wedding ceremony, specifically, repeatedly alludes to the mythical first couple in the Garden of Eden.

The Ancient Rabbis tell us that God created one couple from whom we are all descended to emphasize that none of us are inherently any better than anyone else, that each of us has a unique contribution with which we can make the world a better place, and that each of us, with our partners, if we are so fortunate to find that special person, have limitless potential to create entire worlds.

Posted by Rabbi David Gruber at 2:36 PM No comments:

Last Saturday afternoon, I officiated Arielle and Alex’s wedding ceremony at Dallas Arboretum in . Here are the remarks I shared with them and their guests:

Alex, fittingly, writes about an important lesson his stepparents taught him: “Watching Ken and Trish treat me as their own, I discovered selflessness. The idea of concerning yourself more with the needs and wishes of others than with your own… I became obsessed with finding other examples of this. Who in their right mind would spend their life concerned with other people’s problems? Well, it turns out there are millions…” 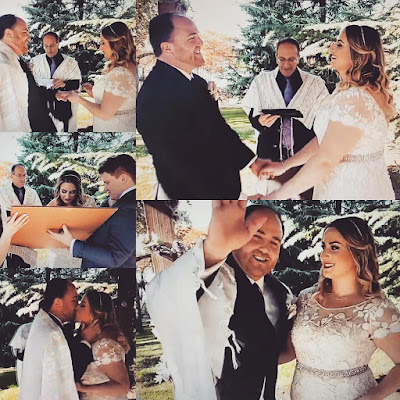 This lesson stands out to me because too many people today seem to implicitly and sometimes explicitly be saying, “I’ve got mine, and I don’t really care if you get yours.” The words of the fictional yet all too real Gordon Gecko, “Greed is good,” seem to be celebrated rather than mocked and condemned.

How did this happen? Arielle relates a funny story that helps explain this fact: “I decided to try Match… I originally signed up for 3 months and, honestly, didn’t see or talk to anyone I even wanted to meet. It was such a waste of time! I was so glad I only joined for 3 months. However, those subscriptions auto renew, and I definitely forgot about that. So my account auto renewed and I was so pissed… [Then with] about a month left [on] my membership I got a message from Dallex. (He’s so creative, LOL!)”

Our society did not end up here by accident. We, as a society, set up systems that brought us to where we are. Many of these systems operate in the background, so we hardly notice them. Every now and then we luck out and those systems end up helping us, like they did in Arielle’s Match auto-renewal, but this is the exception, not the rule.

How do we solve this problem? The Ancient Rabbis had an idea, which builds on a verse from the very first chapter of the Torah. This verse is a popular one at weddings: “And God created man in his image, in the image of God he created him, male and female he created them.”

Without even resorting to rabbinic interpretation, the last words of the verse already tell us that we can only reflect the image of God when we are meaningfully connected to another person.

Here is what the Rabbis say, which takes this to an entirely different level: “A procession of angels passes before each person, and the heralds go before them, saying, ‘Make way for the image of God!’” Think about that next time you see someone you don’t know, someone to whom you feel no connection. Think about that next time you see someone who might be down on their luck, or even someone who has not lived their life as the most upright citizen of the community. Each one of these people is surrounded by angels.

Once you understand that this truth lies beneath the surface, Alex’s original question almost flips on its head. If you truly recognize that each of us is surrounded by angels, who in their right mind would NOT spend their life concerned with other people’s problems? Now think about how cool this world would be if we really took this idea seriously.

Rabbi Michele Lenke suggested this image could be a way of understanding the six feet of distance we are supposed to put between ourselves and others. The six feet could be envisioned as making room for the invisible angels that surround each of us. When we keep our physical distance, we are not trying to get away from one another, but rather, leaving space for our angels.

Posted by Rabbi David Gruber at 3:45 PM No comments: