Saturday evening, I officiated Simone and Ben’s wedding ceremony at the New Orleans Museum of Art, in . Here are the remarks I shared with them and their guests:

Simone and Ben met years before they began dating. And, friends, I need to warn you, you may be overwhelmed by the emotions you will feel regarding their descriptions of that time; so romantic and touching they are. Keep in mind, these two are trained writers. First, Ben says, “It wasn't earth shattering or so memorable, except in retrospect.” Talk about damning with faint praise! Simone continues, “I met (Ben) in a required course called ‘University Writing’ in 2007 during one of the first days of college.” Ben elaborates, “We were assigned to a mandatory small seminar for introductory writing. The class was, frankly, terrible and there wasn't much to get out of it. The professor was a PhD student who was finishing up in the next semester and was already completely checked out (and it showed).” Like I said, folks, this is a real bodice ripper. 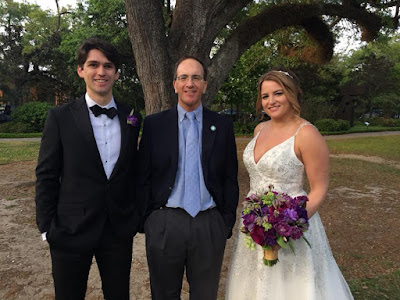 Don’t worry, though, it gets better. Simone seemed to be quite smitten, “I couldn’t take my eyes off his gorgeous head of hair, and wavy locks are apparently something that I find irresistibly attractive. He was kind, sarcastic and handsome, and I remember thinking that I would have been eager to get to know him better...” And the attraction was mutual. Ben says that the second reason to still attend the class was, “that from the back row you could have a decent view of a cute blonde girl (she was a little over-enthusiastic about the class, but it was forgivable).” The first reason was fantasy football with a classmate. A guy must have his priorities in order, after all.

Now, stories at weddings usually don’t take a turn to the macabre, but hey, there’s a first time for everything. “We even worked on a mildly disturbing project together about images of death that entailed looking at lots of pictures of dead Civil War soldiers,” Simone relates. Somewhere, even Ken Burns is shaking his head.

Ok, now let’s really get serious. How we meet our mates can be a fascinating subject to dwell on. Many ancient traditions say that the person we choose as a life partner is predetermined by God. The Ancient Rabbis talk about this happening in utero, in fact. And if that works for you, you should roll with that. Why not?

In a very special place, that’s where it leaves you. And this depends not so much on your cognitive abilities, but on how you were raised to view the world around you, and what occurs to you and others along the way. If you were raised to think that everything you get you are entitled to, because your own innate talents and work ethic are superior, you might not “get it”. However, if you were raised to think of what you have with gratitude for your good fortune, even chance occurrences may be retroactively enriched with deep meaning.

You see this gratitude in how Simone and Ben describe how hard their parents worked to put them through private school. You see it in their recognition that not everyone had such an opportunity. You see it in how lucky they both feel to have been raised by such parents. With that type of recognition, when something great happens to you, you feel thankful and fortunate and lucky.

With that type of upbringing, it is not surprising that Simone says, expressing a sentiment that Ben embraces too, “I am so very excited to be able to declare how much I love him in front of all our friends and family. I’m so happy we have an occasion to celebrate that we found each other. We are very, very lucky.”
Posted by Rabbi David Gruber at 1:55 PM No comments: