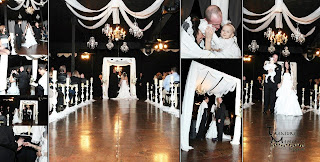 Yesterday (Saturday 11/24) I officiated Jessica and Micah's wedding at the Plaza in Durant, Oklahoma. Jessica loves the teachings of the late Lubavitcher Rebbe, so my remarks centered on some of his words of wisdom:

I ask each couple I marry to write a short essay about themselves, and specifically to touch upon why they want to marry their soul mate. I loved reading what Jessica and Micah wrote. They talk about the deep sense of partnership they share as lovers and parents. They talk about how much they value and respect each other. They emphasize how much they care for each other, and how they each savor and treasure the caring they each get from the other. Jessica writes that Micah “is so loving and caring, often times putting the needs of Ariella and me before his own… Micah is an excellent father. He works tremendously hard to put food on our table… but most of all, so that I can stay at home to raise Ariella properly.” Micah writes in turn, “Jessica is always there for me, to help me, to listen, and to give me advice. She takes wonderful care of me at all times.”

This reminded me of the advice Jessica’s favorite rabbi, Rabbi Menchem Mendel Schneersohn, gave a young woman regarding finding true love. Here is what this sage told the young woman. Listen to this; these words are gold:

“Real love is an experience that intensifies throughout life. It is the small, everyday acts of being together that makes love flourish. It is sharing, caring, and respecting one another. It is building a life together, a family and a home. As two lives unite to form one, over time, there is a point where each partner feels they are a part of the other, where each partner can no longer visualize life without the other.”

Incredible. Having spent time with Jessica and Micah, it is as if the Rebbe is talking about them, and describing their relationship. Jessica and Micah, what is it we wish for you? That you continue to live your life in exactly this fashion, sharing, caring and respecting one another, united together as one.

Posted by Rabbi David Gruber at 7:22 AM No comments:

Yesterday (Saturday 11/10) I officiated Harper and Israel's wedding at their home in San Antonio, Texas. Here are my personal remarks to this special couple and their guests:

When I was a kid, growing up in Israel, my late mom and I really enjoyed reading and discussing columns by a sharp and witty journalist, Tommy Lapid.

One of the reasons I so loved to read him is that though he was as astute as the next guy, and even somewhat of a cynic, from time to time he would take a break and write a very different column. In these different columns he would remind us, Israelis in the 1980s, that though we had our share of problems, with all of the challenges we had, frankly, we had never had it so good. He would remind us how thankful and happy and even content we should be due to that.

Getting to know Harper and Israel I found myself reminiscing about reading Tommy's columns with my mom. Harper and Israel have something quite enviable, something we should all strive for - a general state of mind of thankfulness for what they have in life, true happiness and genuine contentment.

However, some of us, many of us, let those problems, challenges and concerns bog us down so much that we unalterably lose that thankfulness, happiness and contentment, but not Harper and Israel.

What I see in them is an ability to rise above it all, remain centered and come back to that place of thankfulness, happiness and contentment they have found individually and in each other arms.

A Sense of Thanks, Dedication and Purpose

Yesterday (Saturday 11/3) I co-officiated Holly and Gary's wedding with Dr. Darin Wood at Centaur Arabian Farms in Flint, Texas. Holly and Gary met in Afghanistan, and I started with that in my personal remarks.

So, I think every kid, at some point, asks his or her parents how they met. I don't remember when I asked this question, but I know I did. I remember the response. They met at a party. My next question was where, and I don't remember much beyond the answer, "New York." I probably went right back to playing with my toy trucks, because "New York" to a little kid living in Chicago just does not provoke any further conversation.

Now, Holly and Gary's future children will at some point ask them the very same question, and their answers will be quite different. "We met at the Marine Corps Birthday Ball," they will say. Then when the kids ask where, the conversation will really start to get interesting, because "Kabul" just sounds really funny to the young American ear. (Well, to the older one too...) No doubt, their children will ask what on earth BOTH of them were doing in that funny sounding place.

Now, this might lead to a discussion regarding a fascinating concept we Jews call Bashert in Yiddish. Like many words in this Germanic-Jewish language spoken for hundreds of years by Jews across Central and Western Europe, it is so rich that it almost resists translation. Bashert means "meant to be," and also "made in heaven." It can describe a situation, as in, "It was bashert, that we were both at the same Marine Corps Birthday Ball." It can mean one's soul mate, as in, "She met her bashert at the Marine Corps Birthday Ball." You see, the ancient rabbis believed that while one is still in uteri, a heavenly voice proclaims who a fetus will marry. I imagine Holly and Gary will say that their meeting at that place with a funny name was bashert, and that it was also where they each met their bashert.

Now, with many other couples, the discussion might end there. With Holly and Gary, however, I think this will lead to discussions very early on, earlier than in many families, about the love we have for our country, about how lucky we are to have our freedoms, and how sometimes we need to go to funny sounding places to defend those freedoms.

Their children will understand that many in their generation owe their very existence to the fact that young men and women heeded the call to go to far places with funny names to protect our way of life. I believe that that fact alone will imbue them, and should imbue us with a sense of thanks, dedication and purpose.