Saturday evening, Cory Reinhardt and I co-officiated Steph and AJ’s wedding ceremony at the Blue Dress Barn in . Here are the remarks I shared with them and their guests:

One of the things I ask every person I marry to tell me about is how they met their beloved. Some of the answers I get are downright vivid. You might assume that especially these ones would be consistent between the two people. This is not always the case, especially with regard to the ongoing internal monologue we all have going on in our heads.

Just listen to Steph: “My second semester of grad school, I had a Disability and Physical Activity class that I was so excited for because that’s literally my niche in the field I work in... I have a tendency to run around like a chicken with its head cut off, and I was coming from my assistantship on a different floor, so I came into the class a few minutes late. I remember I was wearing my work uniform and cheetah headband, and I came into the room hurriedly and saw AJ and thought, ‘Oh wow, now he’s handsome.’ He was wearing all white and a hat.” 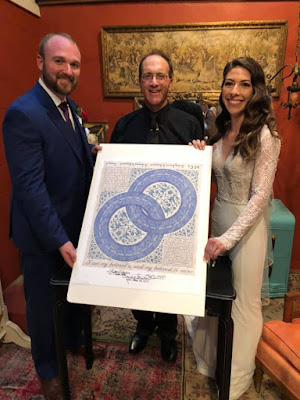 Now, listen to AJ, and do keep in mind – and I hope you can hear the disappointment in my voice – that this professor did not have a copy of the Oxford University Press Dictionary of American Family Names in the classroom. This page turner clarifies that some names are shared by those of Germanextraction, not only those of Jewish ancestry. This will become highly relevant in just a moment: “Dr. Rowland, our professor, began roll call as she did at the beginning of each class. Sure enough, when we got down to the S’s, the name Stephanie Steiner graced my ears. And in that moment, the door swung wide open and in came Steph, in her disheveled frantic manner, stated ‘Present! Sorry I’m late,’ and took her seat. It was in that moment in looking at her, dressed in her Adidas capri leggings, Chicago Athletic Clubs employment shirt, Nike shoes, and a cheetah headband tying the ensemble together, that I knew that I was in trouble... I had found my Jewish Wonder Woman.”

AJ, this might be the worst time for this, but I think you need to know something...

Seriously, though, I actually like the fact that that was his thought, and not only because that and Black Panther were the only comic book movies I have liked in the recent onslaught of comic book cinema. It is because the characters in that movie sound like Steph’s description of her and AJ: “AJ and I are a case of opposites; furthermore, we come from opposite worlds.”

And, yet, the movie’s message is that if you are willing to take the time and do the work, the payoff can be unparalleled. Two people coming from two entirely different worlds can not only work together but thrive, make each other better as individuals, and together make up a team in which together they become even stronger than the sum of the team’s parts.

That is Steph and AJ’s story, in its essence.

That is why AJ, who still maintains Steph is his Wonder Woman, says, “She gives me the drive and purpose to be a better man and to wake up every morning with the intentions of doing Godly work that will have lasting effects.”

That is why Steph says, “He’s the best person I know. He’s made me a better person and encourages me in all aspects of my life. He’s my number one teammate and I’m lucky he’s on my team.”
Posted by Rabbi David Gruber at 5:18 PM No comments:

The Fundamental Truth of This World

Sunday evening, I officiated Rachel and Rosendo’s English-Spanish-Hebrew wedding ceremony at the Monroe Pearson in . Here are the remarks I shared with them and their guests:

Patience is one of the most important virtues in life. Why do I say that, specifically, now? Without patience, we would not be standing here. Listen to Rachel: “Rosendo and I met online... I was actually about to give up on that site until he messaged me. I responded and we messaged back and forth for a couple weeks until we exchanged numbers and then messaged some more and then finally ended up meeting and [we] have been together since our first date.” Like I said, patience, my friends, is what brought us here today… 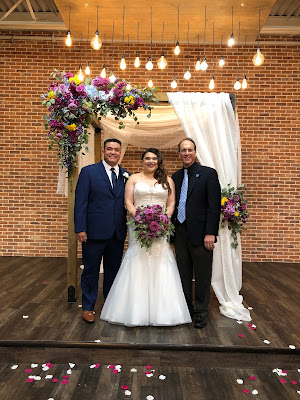 What was it that kept Rachel from giving up on that site? What premonition did she have? I like to think that Rachel recognized deep in her soul that Rosendo was out there, and that through meeting him she would discover that in the words of the Indian Nobel laureate, poet and philosopher Rabindranath Tagore, “Relationship is the fundamental truth of this world.”

Rosendo certainly had this premonition, and he agrees with Tagore. He says, “I feel like I have found my better half… Rachel makes me be a better man and she’s the one I have been searching for.”

“Relationship,” tells us Maria Popova, “is what makes a forest a forest and an ocean an ocean. To meet the world on its own terms and respect the reality of another as an expression of that world as fundamental and inalienable as your own reality is an art immensely rewarding yet immensely difficult — especially in an era when we have ceased to meet one another as whole persons and instead collide as fragments.”

Relationship is what brings ultimate happiness. That is why Rachel says, “Three years later and we are now engaged, and I couldn’t be happier.  I want to get married now… because I’m so excited and ready to start this next step in life and start a family with Rosendo.”

Rosendo agrees, “The reason I want to get married is [that] since I met Rachel, I’m the happiest man on the face of the earth, and I could have never been in this happy if it wasn’t for Rachel being in my life. I want to spend the rest of my life with the person that I love the most.”
Posted by Rabbi David Gruber at 10:59 AM No comments: