Saturday evening, I officiated Robin and Scott’s wedding ceremony in downtown . Here are the remarks I shared with them and their guests:

The story of how Robin and Scott married is reminiscent of an important element added to one of the oldest stories ever written down, the Gilgamesh Epic. Utnapishtim tells Gilgamesh about a great flood that the gods wrought to destroy all of humanity. Most of us will find this story familiar, as eventually this evolved into the story of Noah. 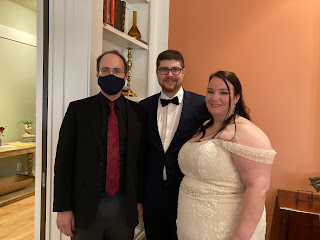 Of course, the question is why would God destroy all of humanity? The God of the Bible, being bound by a moral code, does so because of the evil of humankind. The gods of the Gilgamesh Epic, being more morally ambiguous, do not really have to justify themselves, and in the original versions of the story they do not.

However, later versions make some attempt at least at an explanation, if not a justification for why they would do such a thing. While some versions speak of the gods growing concerned with overpopulation, other versions include a reason, which is at the same time horrifying and hilarious: Humankind is really noisy, and the poor gods are just trying to sleep…

OK, why is that funny? Oh, this is why. Scott recounts what happened the night he met Robin: “One starry headache pounding night a loud ruckus came from our backyard.” Now, luckily, Scott was not an ancient Sumerian god, so all he could do was, in Robin’s words, come “out to tell us to keep it down.” However, once Scott saw Robin, there was no going back to sleep. Instead of scolding them, he joined the party, and here we are seven years later.

Now, there is an important element in what the old radio broadcaster, Paul Henry, would call, “the rest of the story.” Both Robin and Scott recognize that what I just said, “Here we are seven years later,” is by no means an automatic result of that fateful evening. Like all of us, they have had easier times and harder times, and they have chosen to harness all of these experiences to learn and to grow as individuals and as a couple.

What a great lesson for the time we are in. None of us have chosen to live through the experiences we are now going through. None of us can predict how we will come out on the other side. However, if we can escape the random clutches of our fates, perhaps, like Robin and Scott, we too can choose our destinies.