You Have to Keep Climbing

Saturday evening, I co-officiated Aly and Andrew’s wedding ceremony, with Monsignor Lawrence Frederick, at Junior League in . Here are the words I shared with them and their guests:


I am firmly committed to the idea that the wedding should be about the couple. However, I feel like I just have to say first, thank you Aly and Andrew, for making Father Fred part of this wedding. He is a legendary figure at Andrew’s alma mater, and it is an honor to stand here by his side. I fully intend to work this sentence into most of my conversations from now on, “When I was talking to my friend, who worked on the Mercury project…”


Aly and Andrew’s shared alma mater, (Go, Razorbacks!) is central to their love story, since that is where they met. Andrew confesses that up to the point he met Aly, “My grades were always good but I was having a rough first couple of years because I felt as though something was missing.” (Hmmm… What could that be?) He continues, “My good friends were hanging out with a group of people and I ended up tagging along one day. While meeting up with that group of people at a football tailgate in , I got to really know Aly Hueber. We hit it off well and I even gave up going to the game to get to know her more.” Well, if football in is anything like it is in , all I can say is Oy Vey! He says that, “She was something special.” His evidence, by the way, is solid: “She found me funny, interesting, and entertaining!” (Bright girl!) He says that he felt the exact same way about her.


Interestingly, their stories of their first few years at college parallel each other, but Aly has an interesting prelude to the story Andrew tells about that fateful day he ditched football for her, “I entered my freshman year and rushed a sorority… and made some...  amazing friends during my first two years in school. By my junior year I had a circle of friends that hung out about every weekend. I heard through these friends about "Sprick" quite a few times but hadn't met him. At a birthday party… I met this mystery guy for the first time and didn't think much of it.” (Ouch!) 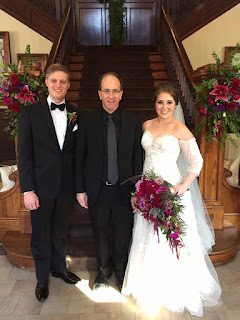 Don’t worry; quickly their stories converged, “Andrew and I talked and laughed the rest of the day. I was amazed at how genuine and interested he was with me. He even skipped going into the football game to stay and spend time with me and my friends. I knew there was something different about him. I heard from Andrew the next day which confirmed he was different from most of the college guys I had met before. He wanted to see me again.”


Pretty quickly, these two feel for each other, and it wasn’t long before they knew that they were destined to be together and marriage was in the cards. And when this engineer proposed, his proposal – you can’t make this stuff up – centered on the idea of Pi. “He proposed on Pi Day, March 14,” Aly says, “and gave a beautiful speech about Pi being an infinite number similar to our infinite love. This was the moment I had been waiting for, but even better.”


Now, Aly and Andrew had one more symbolism, that was hidden in that proposal, so hidden they may not have even realized it. You see, I skipped over the time they took to build their relationship. During this time, they not only made the adjustments necessary to turn two into one. They even passed through the crucible of a long distance relationship, not only made it work, but saw it bring them even closer. They recognized what most sensible couples do. To make a relationship last, you must be prepared to embark on a continuous journey. The engagement, the wedding, and all subsequent milestones, are stops on the way up to the summit.


Now, like most Arkansans, both Aly and Andrew call the mountain upon which they became engaged, . However, the United States Geological Survey refers to it as . Why? Because a “mount” refers to a peak, while a “mountain” refers to a ridge. (Thank you, Wikipedia!) is a ridge. On , you have to keep climbing to get to the summit, Signal Hill. That, my friends, is Aly and Andrew’s reminder, or signal, if you will, to us today: If you want your relationship to stretch to eternity, you have to keep climbing.
Posted by Rabbi David Gruber at 2:03 PM