The Sum of All Loves

Saturday afternoon, Rev. Mike Spitters and I co-officiated Cassie and Corey’s wedding ceremony at the , in . Here are the remarks I shared with them and their guests: 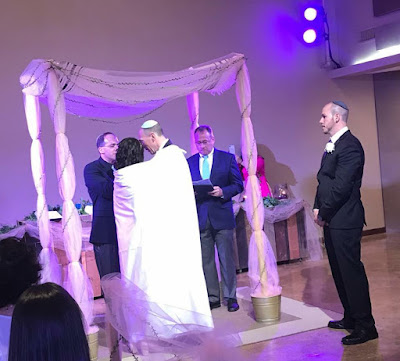 Have you heard of the sum of all fears? Now, if you could see my notes, you would see that I didn’t capitalize these words. That would tell you that I am not referring to the excellent Tom Clancy novel or the abomination of a movie based on it.

I am referring to the original phrase uttered by one Winston Churchill: "Why, you may take the most gallant sailor, the most intrepid airman or the most audacious soldier, put them at a table together - what do you get? The sum of their fears."

Churchill’s concept of adding up emotions is fascinating. Each of the three at his table come from a different vantage point, a different military culture, and thus contribute to a sum of those emotions. There is great power in that sum, which may be greater than its parts. Since it is fear, Churchill sees it as a problem to overcome.

What if, however, we found a situation, which involved a sum of a different more positive emotion, love. What would a sum of loves look like? Well, I dare say you may be looking at one, and it is the creation of Cassie and Corey, here today.  To paraphrase the old prime minister, “Why you may take a West Coast Buddhist bride, an East Coast Jewish groom, a Disciples of Christ minister and a Rabbi, put them under a Chuppah in a church. What do you get? The sum of all loves.”

Now, humor aside, this is really how Cassie and Corey have lived their lives. They have both, as individuals and as a couple, followed the maxim of Maimonides, one of the greatest Jewish sages and philosophers of the Middle Ages, “Accept the truth from whatever source it comes.”

This might sound obvious, but it is not at all so in our world. Frequently, and this may be one of the greatest causes of our problems, we judge the truth of something by where it comes from. Is it from my “team”, my “tribe”, those who look exactly like me, those who think exactly like me?

This is not how Cassie and Corey approach the world. (Except if we are talking about the New York Mets. I mean, there have to be some limits!) Cassie has a deep connection to her Buddhist roots, but she has mostly found spiritual sustenance, through volunteering and other good works, in Christian churches. Corey has a deep connection to his Jewish roots, but he has mostly found spiritual sustenance not through any classical texts, but through more universal ideas of deep connections to loved ones, both past and present.

And, together, Cassie and Corey have nurtured their bodies and souls, through cycling, and not just because they cycle with the pastor standing next to me. They even, and for me this a first, have a theme or motto for this wedding. This really says it all, and I think even old Winston might crack a smile at hearing it: "Bridging two worlds together, one pedal at a time".
Posted by Rabbi David Gruber at 2:58 PM