Monday night, Rev. Glen Reddell and I co-officiated his daughter, Debbie and Mike’s wedding ceremony at Huckleberry’s, in Comfort, . Here are the remarks I shared with them and their guests:

I ask every person I marry to write an autobiographical essay. What a joy it was to read the essays of Debbie and Mike. They have both lived rich lives and have a wonderful capacity for self-reflection. 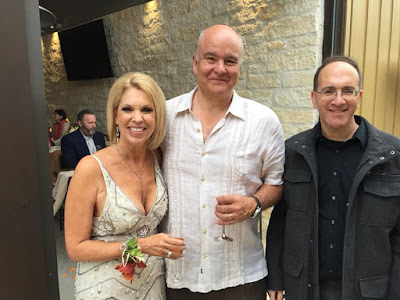 Debbie reflects on the upbringing she had, and how it taught her the importance of love. She writes that her parents emphasized this through word and deed, “through their love for each other and their love for us, (and most) importantly (to) show God's love for others by the way we treated people. That lesson still resonates with me daily... I agree with my dad's philosophy that at the end of the day we are ALL God's children...”

Mike can attest that this PK (preacher’s kid) practices what she preaches: “I’ve found a partner in Debbie who will keep me centered, well focused and committed to all that true love provides. I’ve found my best friend and I’ve found my heart in the process.”

“I’ve found my heart in the process.” Isn’t that a fascinating statement? We think of love as finding something or someone who is external to us. But what if love is about finding ourselves? Because if you listen to Debbie and Mike tell their stories, as individuals and as a couple, and if you watch their story continue to unfold, that is exactly what they are all about.

This idea that in finding your true love you find your true self is beautifully reflected in a parable related by the great Rabbi Nachman of Breslow, a great mystic who lived around the time of our own Founding Fathers.

A man living in , an Austrian possession at that time, had a recurring dream, that there was a treasure buried under a bridge in . He traveled to the capital city, found the bridge, and discovered it was right outside the Austrian monarch’s castle. Digging up the treasure was going to be a problem. Indeed, a castle guard approached him asking him to state his business. The man came clean, and explained his dream.

The guard started laughing, and he explained that he too had a recurring dream that under a specific house in , which he carefully described, was buried treasure. However, the guard said, he is not foolish enough to drop everything and go dig under some house in .

The man politely thanked the guard for steering him straight, and left. What he did not tell the guard was that the latter had described the man’s house to a “t”. He returned home, and dug up the treasure.

He found the treasure. That is exactly the language that Debbie uses about Mike, “I feel so blessed and fortunate to have found him at this stage in my life. He is my treasure.”

There’s another specific part of Debbie and Mike’s story that reminded me of Rabbi Nachman’s parable. Listen to what Mike writes about the first time he and Debbie visited the town we are gathered in today:

“Neither one of us had ever been to this small town. From the moment we arrived, I was overcome by a sense of calm and tranquility. We shopped the small town, drank wine, spoke to those in the stores and just had a wonderful time – among the best that I had with Debbie to that point. We had a blast and we both committed to returning at another time. It dawned on me a bit later that the town was not the reason, it was the person that I was with. Our visit to Comfort brought comfort to me on many levels and I can say that being there that day opened a new chapter in my relationship with Debbie. That experience is an integral contributor to who I am today and the kind of future that I want to share with Debbie.”