Saturday morning, I officiated Cydney and James’ wedding ceremony in . All participants are in this picture! (Masks were removed just for the ceremony, in case you were wondering, which under the Governor’s executive order, is kosher.) At the end of the ceremony, before James broke the glass, I shared these words with them: 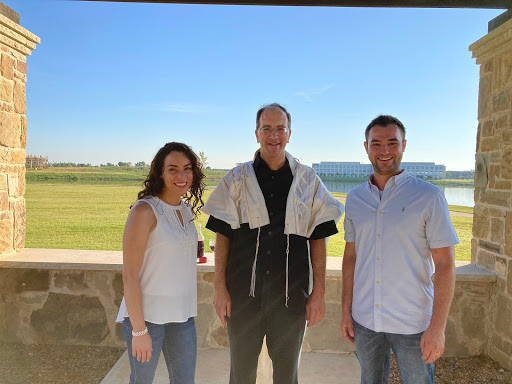 When the was destroyed, many responded by going into a perpetual state of deep mourning, refusing to eat meat or drink wine.

A great sage, Rabbi Joshua, challenged a group of these people: “My sons… why do you not eat meat nor drink wine?” They indignantly replied: “Shall we eat flesh which used to be brought as an offering… drink wine which used to be poured as a libation?”

Rabbi Joshua challenged them not to eat certain fruits or even bread, since these too were offered in the . They managed to wiggle out of those challenges, with their idea intact, saying they would eat other foods. He reminded them that once a year, water was offered, and so, by their logic, they could not drink water. Now, they were stumped.

Then he said, “To not mourn at all is impossible… to mourn too much is also impossible… The Sages, therefore… ordained: A man may stucco his house, but he should leave a little bare… A woman can put on all her jewelry but leave off one item.” This is, likely, the origin of the next custom.

We are currently experiencing a calamity, without precedent. One could respond in different ways, just as Jews responded to the ’s destruction in different ways. Obviously, response to trauma does not follow logic. However, we should aspire to respond as Rabbi Joshua suggested then and as you do today.

While not minimizing the suffering we see around us, we adapt, and by the grace of God, with hopes for a better future, we forge on.