Beyond Anything I Can Compare

Sunday evening, I officiated Sivan and Kevin’s wedding ceremony at the Vouv, in . Here are the remarks I shared with them and their guests:


In , being fully honest with others is something of a challenge for many of us. Hence, those oh so sayings, "It is what it is," "Well, there you go," or (my favorite), "Bless your heart!" Each of these really means, "I think you are full of crap, but I won't tell you that, because we don't do that here." 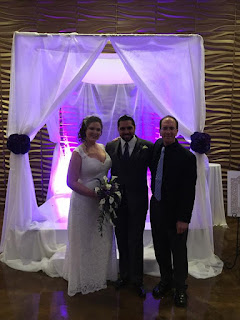 Now, the great thing about Israelis, and I can say this because I am one, is that we don't talk like that. We are like New Yorkers on steroids. We say what we mean, and we mean what we say. The sabras, or native born Israelis, like Sivan, really stand out in that respect. I can say that, because I am married to one. You always know where you stand with a sabra.


If you know Kevin, you know that description fits him too. You might be called an honorary sabra. He met Sivan through her coming to speak to a club he belonged to. Meant to be, you might say? Here is how Kevin describes it: "Though there is no evidence for fate or determinism, I will admit circumstance did align." Poetry it ain't, but isn’t it honest?!


And what was Sivan thinking as she waited to speak, and saw Kevin in the audience? "I couldn’t look away. He was beautiful. After the panel he came to introduce himself; he was so nervous. He was too great. So naturally, I assumed he’s gay. I legit tried to set him up with my gay best friend as the night went on and he was incredibly confused." Hey, I told you she was honest!


Now, being honest with others is one thing, but being honest with yourself, can be a challenge regardless of where you come from. This is an area where Sivan and Kevin really stand out. They have asked uncomfortable questions, and they have not shied away from the answers they have found, regardless of where these answers took them, and what others might think. In fact, it is not often you meet two individuals, who have thought so long and hard about their places in the world, their life journeys so far, and where they wish to go from here.


When you are honest with others and with yourself, you have a shot at true self-actualization as individuals and as a couple. Listen to Kevin: "My desire and love for Sivan is beyond anything I can compare. She is really a great person to be around. Being myself, being THAT person (I am) when I am around her is amazing... With Sivan the best things come out... I just want to spend as much time as I can with her doing everything. It is strange that one person can make one so happy. (Even) going out to Costco is an adventure with her. Who knew that was possible?"


And Sivan adds, "I want to be with Kevin for the rest of my life... We’ve been through a lot together, in a very short amount of time... If we were able to overcome so much together, I know this is the right time for us to claim our love in front of everyone we love."
Posted by Rabbi David Gruber at 4:12 PM