Began with a Salute

Sunday evening (7/19) I officiated Reba and Justin’s wedding ceremony at the Poetry Springs Events in . Here are the remarks I shared with them and their guests:


Fortunately for Reba and Justin, they met while serving in the National Guard, which does not prohibit fraternization. When I first spoke to Reba and Justin, I couldn't help but playfully ask if he had in the past, when they met and started dating, saluted her due to their differing ranks, and her commission. (He had, most of the time, at least...)


I recently considered though how a what a salute conveys might be really apt for dating, and deciding on a mate. You have to look back at possible origins of the salute to see what I mean. 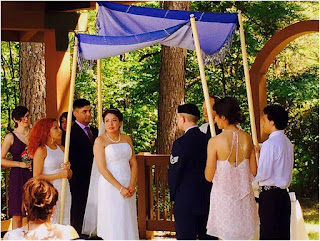 According to the U.S. Army Quartermaster Corps Historian in , "One romantic legend has it that today’s military salute descended from the medieval knight's gesture of raising his visor to reveal his identity as a courtesy on the approach of a superior. Another even more fantastic version is that it symbolizes a knight's shielding his eyes from the dazzling beauty of some high-born lady sitting in the bleachers of the tournament."


Now, take one look at Captain Villanueva here, and the second explanation does not seem fantastical at all. Also, Justin implies that the first reason might not fully fit their relationship, as officer and airman. He says that Reba was first interested in him, BECAUSE in their very first interaction he spoke confidently, bluntly and plainly to her, in a way that most Staff Sergeants don’t speak to Captains. However, if we delve a little more into the essence of the first reason, not deference, but revealing your identity, it really does fit well.


Military life may be renowned for its camaraderie, but it can be lonely too. As Reba says, "I loved traveling in the military, but I think it was spending a New Year’s Eve in without a date, that made me feel alone. I guess I finally had the need to want to share my life with someone." It was, perhaps this realization that led Reba to open up (to reveal her true identity or essence, if you will) to Justin, when they subsequently met at a party. "Reba and I," says Justin," ended up off in a corner in deep conversation for several hours, ignoring everyone else at the party." Reba says that she was, "really impressed not only by how innately intelligent he was," but by his character. As Reba adds, "I ended up really liking him at the end of the night and wanted to talk to him more."


As Justin tells it, in short order, he and Reba became inseparable. And as time went on, and with more experiences and challenges that military life throws at a couple, they not only revealed their mutual identities in the spirit of the salute; they found their own and each other's essences, and with it a deep and wonderful connection. And so, Justin could state with surety, "Reba is my best friend and confidant, and there is no other woman I would ever want in my life." And Reba could echo that, saying, "With Justin, I feel like I am finally home."


And so today, what began on a faraway military base with a smart salute, today they will make official under the Chuppah, which symbolizes coming home. Reba and Justin, may you continue to enjoy the deep connection you have built, and may your home be a true  בית נאמן, a faithful home, to you both and to the family you establish here today.
Posted by Rabbi David Gruber at 7:53 PM