A River, a Pot Or a Bird 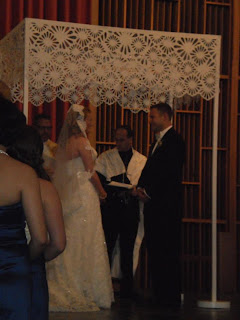 Yesterday (4/13) Deacon Jim McKenzie and I co-officiated Katie and Charles' wedding ceremony at the Benton Chapel of Vanderbilt University in Nashville, Tennessee. Here are the remarks I shared with them and their guests:

When I sat down to write the remarks for this wedding I came across a passage in the Talmud, that I had last studied about 20 years ago. The Talmud is a fascinating book, which records the discussions of the great rabbis from about 200-800 C.E. Though its main thrust is to serve as the legal foundation for Jewish Law, it contains fascinating stories and ancient lore too.

In the ancient world people saw dreams as potential signs and messages from the divine. The ancient rabbis were no exception. In the first tractate of the Talmud on folio 56b the rabbis say that if one sees a river, a pot or a bird in a dream, these are all good signs of peaceful relations in one's life.

Hundreds of years later, Rabbi Elijah of Vilnius wrote a fascinating interpretation of this passage. He said that really these three items represent three different levels of relationships. The river, to this day used to transport commercial items, represents a loose impersonal relationship, that commercial partners might have with each other. The pot, which allows the fire beneath it and the water within it to coexist and work together, symbolizes a closer personal relationship based on mutual complementary interests. Finally, the bird, in which folded into the one creature are the ability to travel by land and the ability to fly, symbolizes two people coming together in the closest of relationships, and becoming one inseparable entity.

Doesn't that final symbolism sound exactly like the relationship Katie and Charles have? During the last five years they have had some, let's just say this diplomatically, "unique" experiences. These experiences have created a bond between them that typically one does not expect to see amongst couples of their age. In fact their relationship reminded me of a story that really exemplifies what the Talmud talks about, and what Katie and Charles have. It is said of Rabbi Aryeh Levin, that he once took his wife to the doctor. When the doctor asked what the problem was, the saintly rabbi said, "We feel pain in my wife's leg." You see, Rabbi Aryeh and his wife were so in love, their relationship was so close, that when her leg was hurting, THEY, not SHE felt pain.

What we wish for you, Katie and Charles, is that you continue to experience deep mutual love and empathy, and have such a close relationship. And together, may you experience only joy, pleasure and happiness from this day forward.

Posted by Rabbi David Gruber at 7:28 AM